TurboPlay, DuoWorld and TurboForce were magazines that exclusively covered the TurboGrafx-16 / TurboDuo video game consoles. At the Archives, you can view page scans of articles, reviews, and advertisements printed in the magazines, newsletters and catalogs of yesteryear.

A great big Thank You! goes out to BlueBMW for authoring this article and contributing the photographs (minor edits and additions by esteban). D-Lite scanned the manual. View the original article at the pcenginefx.com forums.

In the late 1980's—an instruction manual lists September of 1989, specifically—United Amusements (a company based in Los Angeles, California) produced "TurboGrafx-16" arcade units. They were designed to be retrofitted into an existing cabinet and allowed an arcade operator to run TurboGrafx-16 games in an arcade coin-op setup.

The unit is mounted on a plate that, in turn, can be mounted in an arcade cabinet like any other PCB. It is not a particularly large unit. 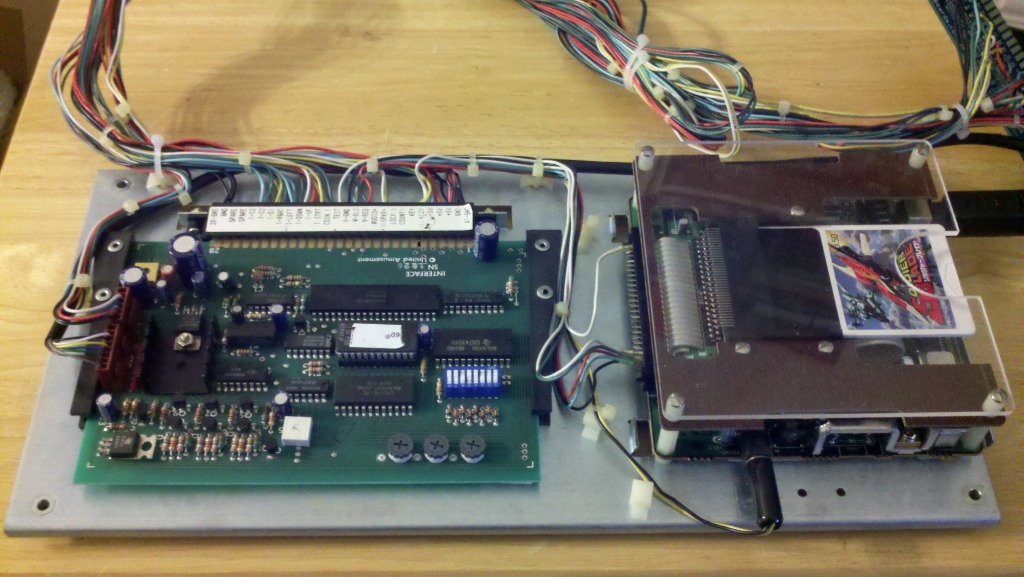 CLICK IMAGE TO ENLARGE: Note that the Japanese HuCard Soldier Blade (1992) is fully inserted into the PC-Engine on the far right.

Note that this is not truly a plug and play JAMMA unit. It uses a JAMMA harness that has been customized for the unit. In other words, you cannot simply plug the unit into the JAMMA harness of any arcade cabinet and expect it to function. The other end of the harness has loose wire ends for: coin input, speaker + and -, ground, +12v, +5v and -5v. It also has two large "AMP" connectors for the player 1 and 2 control panel connections. 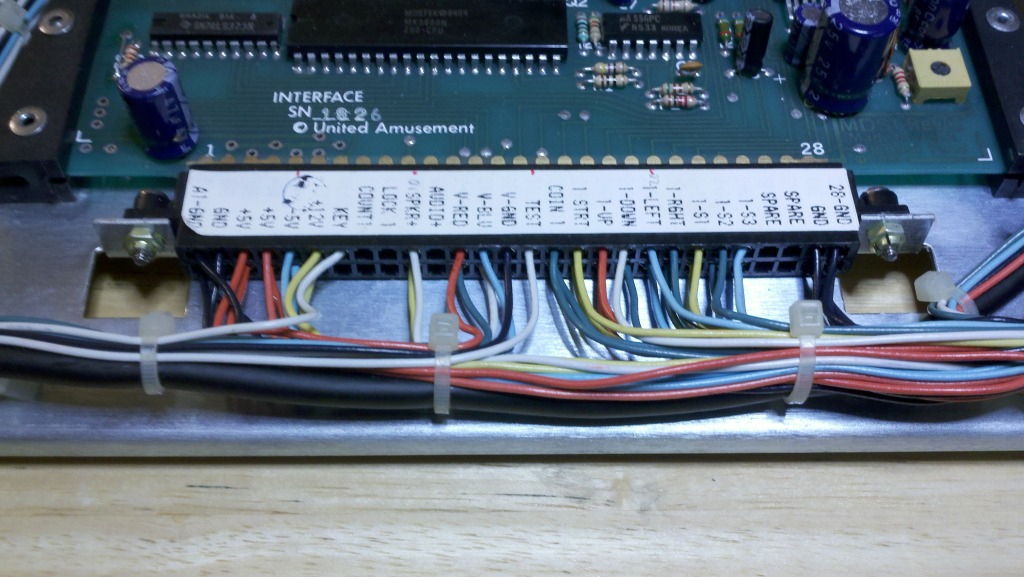 CLICK TO ENLARGE: Untapped potential. This unit has wires for two players, though only player one is functional. Perhaps they were considering making a two player version later on. The instruction manual for the unit told of how to install this unit into several different popular cabinets of the time. 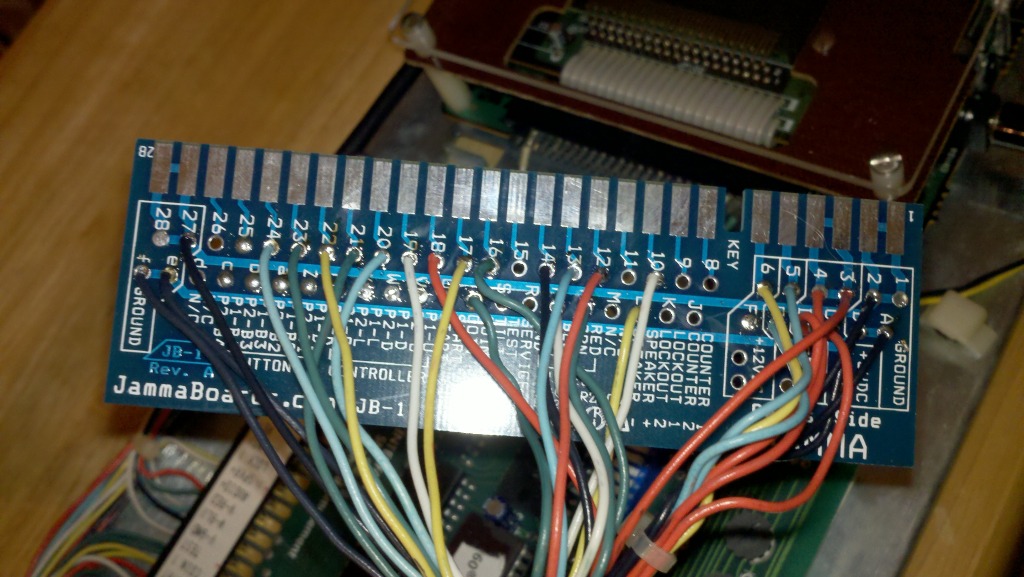 CLICK TO ENLARGE: Plug-n-Play. I wired the ends of this harness to a JAMMA fingerboard to make it plug and play JAMMA capable. While not the original intended method of installation, this allows the unit to be installed and uninstalled like any other arcade PCB. Notice I only wired the 1st player control panel wires in.

Despite its marketing as a "TurboGrafx-16"" kit, this unit actually uses a standard white (first generation) PC-Engine mainboard. It has been removed from its shell and mounted with screws and posts onto this unit. You can tell that it is an original white PC-Engine because of the RF out (visible in the first two photos below).

If the unit was advertised as a TurboGrafx-16 unit, how did it accommodate North American titles? Apparently the company that distributed this unit, United Amusements, also distributed games for it. From the pictures I have seen, they look like custom PCB's with ROM chips installed. I can assume the ROM chips held the game data and the PCB's served to convert North American games to run on the Japanese PCE hardware. NOTE: I have not tried US games through a converter board yet, so I do not know if the region lock pin is disabled or not.

The PC-Engine can be removed and used externally with a power cord, controller and RF unit or IFU.

Inside the unit, three connections are made: the controller input (bottom left), the power input (top middle), and the expansion port (center). 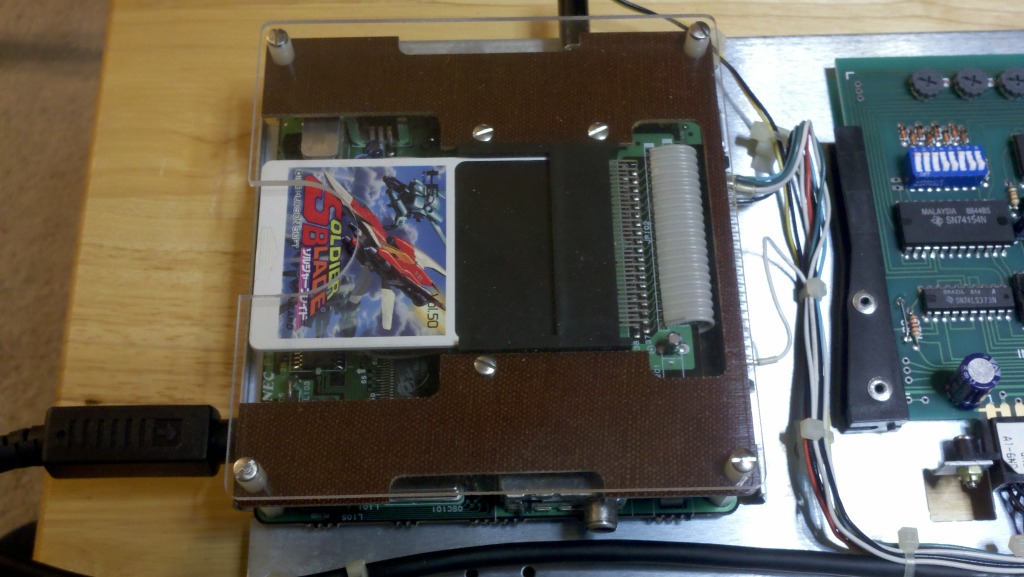 CLICK TO ENLARGE: VESTIGIAL STRUCTURE. As previously noted, the RF OUT (bottom center) is a tell-tale sign that this is a re-purposed first generation "white" PC-Engine. See next photo for a better view of RF OUT. 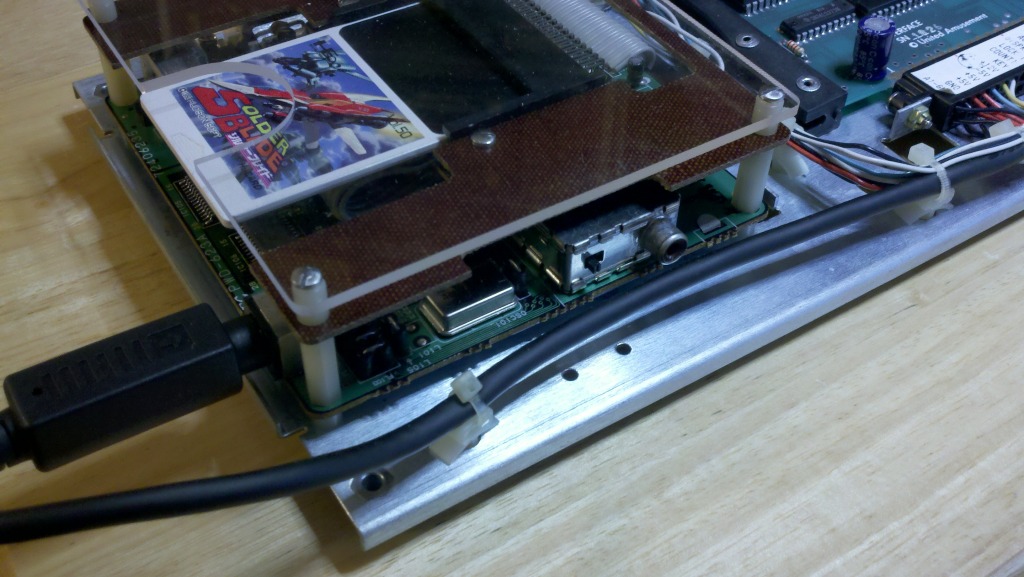 CLICK TO ENLARGE: Controller input. The controller input (bottom left) is a standard mini DIN8 cord that goes to the interface board (more on that later). It plugs in as a standard controller would. ALSO, this photograph provides a better view of the RF OUT and CHANNEL 3/4 SWITCH (center) found on the original PCE (and TurboGrafx-16) consoles. 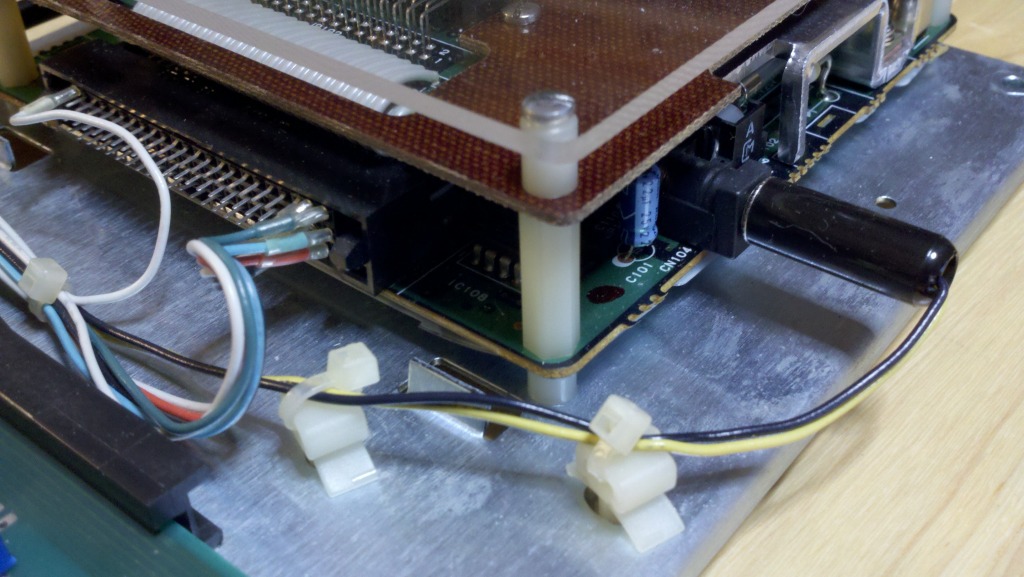 CLICK TO ENLARGE: Expansion port (left) and power input (right). The power port has a custom plug that is wired to the JAMMA edge at one of the 12V pins and one of the GND pins. The other 12V pin has a wire running from it for connection to the cabinet power supply.

From what I can tell, the following connections are made:

So basically, the Interface unit inputs the Right channel audio, and the video data in via the JAMMA edge of the interface mainboard. The audio goes through an amplifier circuit complete with a volume pot and then goes out the JAMMA edge on the +/- speaker connection. There is some additional sound circuitry that adds sound to the sound output. Notably, when you turn the unit on, there is a loud beep sound through the cab speakers, and a chime. I understand these to be self test sounds. When a person's credit time reaches 30 seconds remaining, another chime will sound through the cab speakers to alert the player to insert more coins.

If no additional coins are inserted, the system resets and locks out the RUN button. I assume this is why there is a wire connected to the RESET pin on the PC-Engine rear interface.

The video enters the unit and is amplified with what looks like a transistor amp setup. There are trim pots for each color line also. It is output via a connector that plugs into the interface board. This connector has the standard arcade monitor input plug on the other end of it. 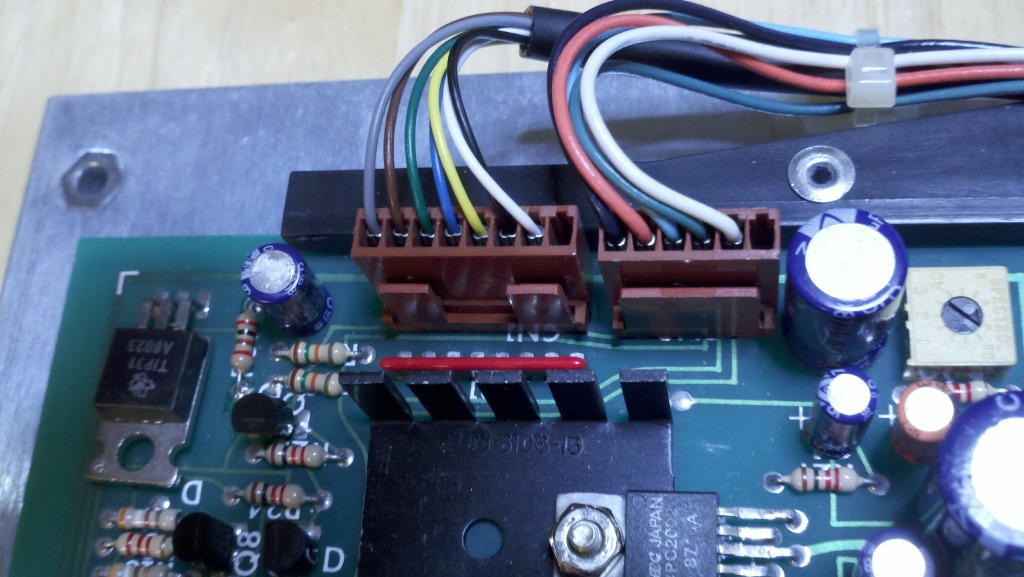 Speaking of the controller input, I traced back much of the circuit for the control panel connection. Basically the control panel buttons and joysticks connect to the JAMMA edge of the interface unit. All the buttons/joystick connections (except the START button) connect to an NTE74157 chip, which is the same chip that is used in TG-16/PCE controllers to convert 8 inputs into 4 wire output.

Here's a general diagram I drew up of how it connects. I've cut out the START button's control circuit and connected it directly to the final pin on the NTE74157 chip it ends up at:

CLICK TO ENLARGE: It seems that this same setup could be used to connect an arcade style controller to a standard TG-16/PCE console.

Here are some scans of the interface board: 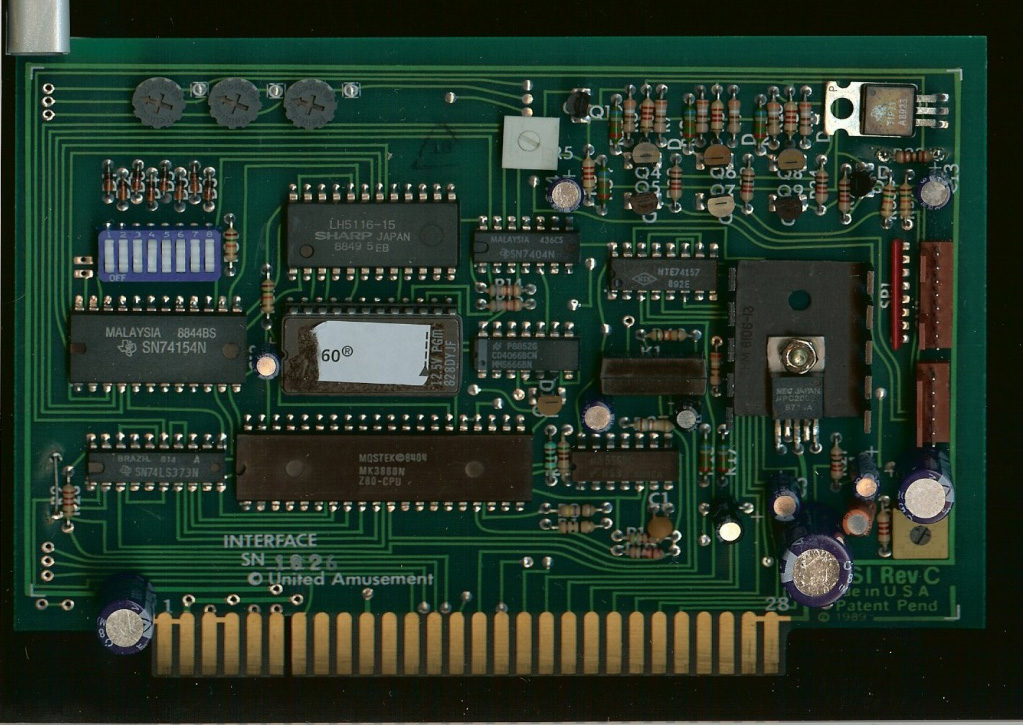 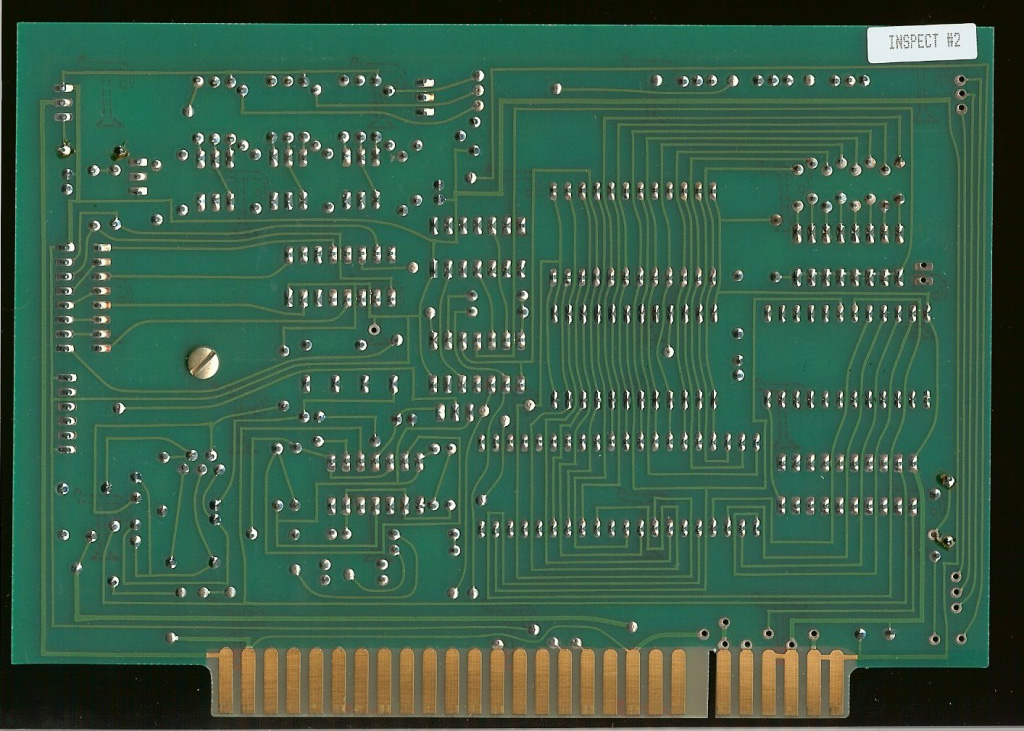 All-in-all the TurboGrafx-16 JAMMA Unit is a neat setup. The coin operation stuff is particularly unique! As far as a unit to use for regular play, well, there are some concerns and shortcomings:

Note: If you can help improve the accuracy of this section, please contact us!

I am not certain how many of these units were built, nor do I know how many still exist today. I speculate that at least 100 (perhaps a couple thousand) units were produced, though I have no information to support this assertion. The unit does not appear to be prototype quality. Unfortunately, the serial numbers on the units and warranty cards do not provide any useful clues on the actual production numbers. That said, they seem to be uncommon, making only occasional appearances in the market and/or private collections.

United Amusements, Inc.—"Leaders in the Business of Video Games"—was a company based in Los Angeles, California. Founded by John W. Hibbs, United Amusements appears to have been involved primarily in the coin-operated game industry and licensed/contracted with Japanese companies.

For example, United Amusements licensed Airwolf (1987, Arcade) from Kyugo Boueki (Japanese developer) and distributed it in the United States.

According to the service manual (and media coverage at the time), UA's PCE/TG-16 JAMMA conversion kit appears to be officially sanctioned by NEC and ready to ship to arcade operators when the TG-16 launched in autumn of 1989 (the first page of the service manual .pdf lists "9.26.89" as the date of inspection by UA's quality assurance).

One period of John W. Hibbs's career is of particular interest to us. Namely, the period that coincided, more or less, with the Golden Era of the video arcade.

According to his resume, Hibbs was a successful entrepreneur who entered (and exited) the arcade industry perfectly:

Unfortunately, we know very little about the relationship between United Amusements and NEC. For example, who initiated the partnership? Was John W. Hibbs involved in any meaningful way with the NEC partnership, or was another party at UA orchestrating it?

Sadly, until folks who were directly involved in these projects share their experiences, we are left with little more than speculation.

That said, the UA-NEC relationship remains an intriguing part of PCE's unique history in North America. 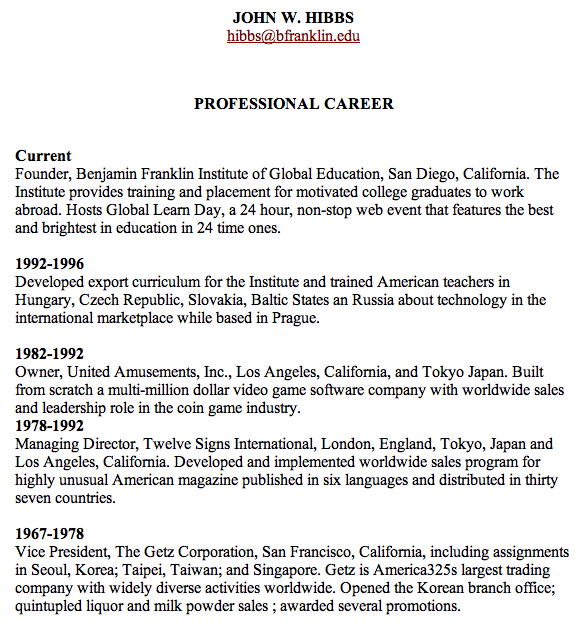 ASIDE: Typos, especially in the first entry of a resume, do not inspire confidence.

This page is a WORK IN PROGRESS… ▲